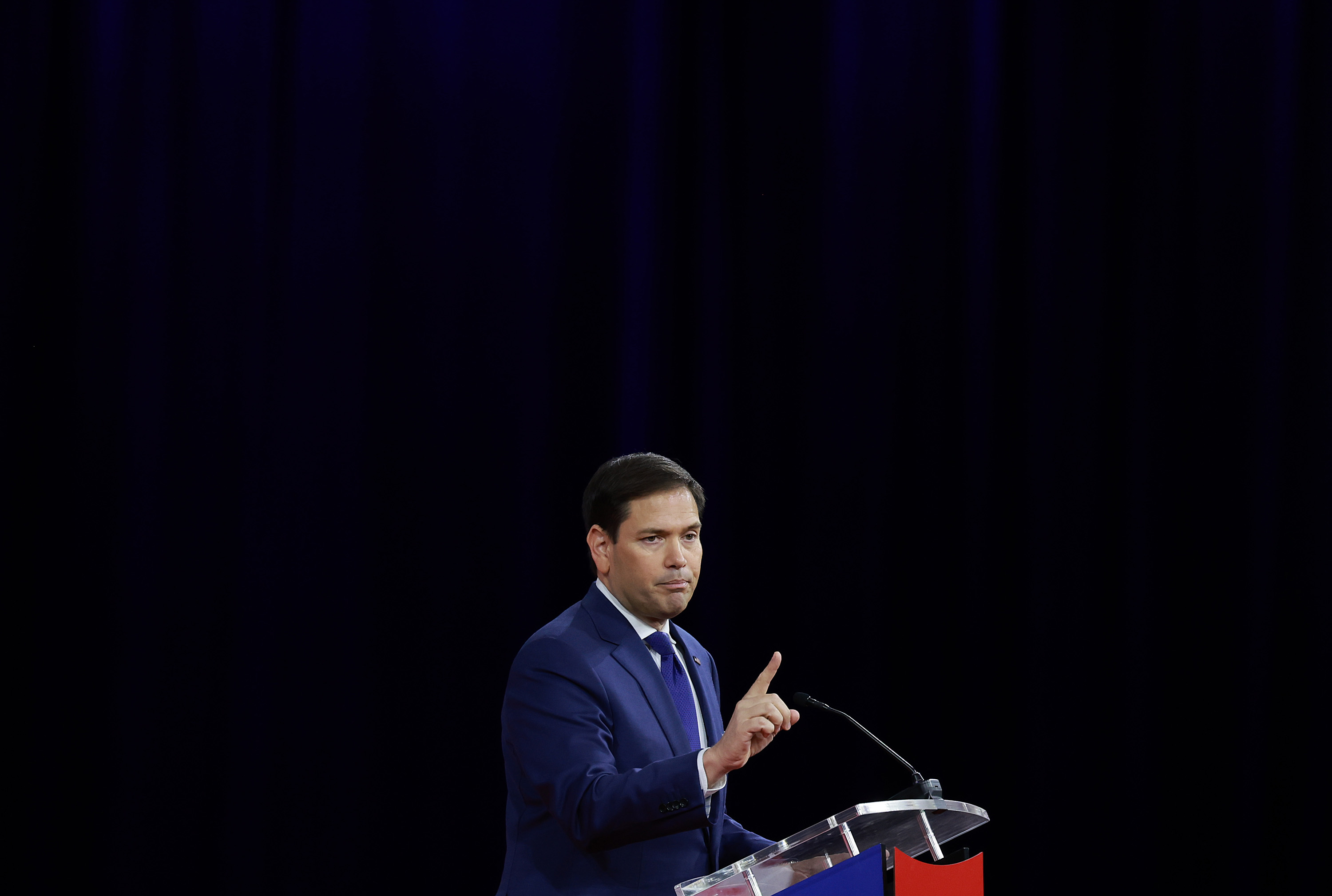 Publicly, Rubio is joining other Republicans in questioning the Justice Department’s grounds for seeking a warrant to search Trump’s Mar-a-Lago estate, and downplaying the investigation as a “storage” issue. To less fanfare, he’s also joining forces with a top Democrat to demand a formal assessment of any damages to national security related to Trump’s handling of the documents.

Staying in the good graces of Trump and his voters will help Rubio as he faces Rep. Val Demings (D-Fla.) in November, and the Republican senator has taken to Twitter and Fox News to slam the search as an extreme tactic targeting Trump ahead of a possible rematch with President Joe Biden in 2024. But the senator insists that his public posture has nothing to do with reelection concerns, instead trying to couch his argument about a heavy-handed DOJ in terms bigger than electoral politics.

“The people who hate Donald Trump are happy about the raid. The people who support him were not,” Rubio said in an interview, putting himself in a third category: “A lot of other people are wondering about the wisdom of undertaking such an effort, an unprecedented effort, before having exhausted every other opportunity or every other potential option they would have.”

His ability to balance the competing demands of Trump-base courtship and his Intelligence Committee duties could shape his future in the Senate, and beyond. Rubio’s post on the panel is his most important since he joined the Senate in 2011, and he has built a strong relationship with Sen. Mark Warner of Virginia, the Democratic chair of the committee.

As partisan politics consume most other major Senate committees, Intelligence has managed to remain the gold standard for investigations with cross-aisle credibility. In a brief interview this week, Warner vowed that he and Rubio would conduct their latest Trump investigation in that spirit.

“We kept our whole Russia investigation bipartisan, and I’m committed to trying to maintain those same kinds of standards,” Warner said when asked if he’s confident the panel’s Trump inquiry can remain bipartisan.

But Warner also took aim at one of Rubio’s central contentions — that the documents recovered from Mar-a-Lago might not be classified because intelligence officials never informed congressional leaders that some of the materials were missing in the first place.

Without mentioning the Floridian by name, Warner said: “The idea that some of the Trump advocates are not even acknowledging that these are classified is kind of beyond the pale.”

“Until the size or the extent of the reach becomes clear,” Warner added, “I don’t know how you pre-warn [Congress].”

Some Republicans have cited the absence of a briefing or notification of a potential national security threat in the earlier stages of the legal fight between Trump’s lawyers and DOJ in downplaying recent reports that among the materials Trump hung onto were nuclear-related documents. (The intelligence community hasn’t yet told Rubio and Warner why the upper rung of congressional leaders wasn’t informed, but a formal briefing could occur as soon as next week.)

Even as he describes his concerns about the search as bigger than Trump hosannas or hostility, Rubio still suggests that the entire DOJ investigation appears politically motivated because of recent media leaks about the documents recovered during the FBI search.

“It’s been my experience that legitimate and credible investigations that have no political motive do not involve the almost-daily leaking of information to influence a public narrative, which is what we now see,” Rubio said. (Much of the information related to the documents retrieved at Mar-a-Lago has come from public court records, some of which are redacted.)

His vocal critique contrasts with some fellow Senate Republicans who are eschewing any speculation about the documents.

“I’m going to leave it to the FBI to go through the investigation and answer questions people have about the warrant process,” said Sen. Thom Tillis (R-N.C.), a Judiciary Committee member. “But at this point, I’m just going to let the investigation go forward and not comment on it.”

One former top intelligence official said that suggesting that the documents might not actually be classified, as Rubio has done several times, is a bridge too far.

“Downplaying this whole situation as either overdue library books or, as Sen. Rubio said, merely a document storage issue, does a real disservice to national security and to the people whose lives are potentially at stake because of the possibly improper disclosure of this information,” said Glenn Gerstell, who served as general counsel of the National Security Agency during the Trump and Obama administrations. “Anyone concerned with our security has to recognize that this [may] be treated by the intelligence community as a very, very substantial compromise.”

Rubio pushed back on the notion that his public statements deflate any of his oversight efforts with Warner, which he said center on “what the intelligence community did to keep us informed of what they may or may not have perceived as a serious counterintelligence threat.” Separately, he said, seeking a search warrant for the home of a former president — knowing it would have political ramifications — is “a really high bar to meet.”

In the meantime, lawmakers are seeking classified briefings from intelligence officials as soon as next week, when the House returns to session. The Gang of 8 — the moniker for the handful of congressional and Intelligence Committee leaders often briefed quickly on sensitive matters — would likely be the first looped in, lawmakers said.

Director of National Intelligence Avril Haines told Warner and Rubio recently that her office would spearhead a review of the seized materials and evaluate potential risks to national security. Warner said Wednesday that he wants to hear an “interim” assessment from Haines’ office as soon as possible.

Warner and Rubio have received public and private support from nearly every member of the Intelligence panel. Their inquiries remain the only bipartisan ones related to the DOJ investigation of Trump; in the House, the two parties have yet to formally join forces.

“The Senate Intel Committee has been uniquely bipartisan in the committees of the Congress. I hope that the House committee is moving back in that direction,” said Missouri Sen. Roy Blunt, a member of that panel and of GOP leadership. “But I have a lot of confidence in both Sen. Rubio and Sen. Warner to move forward treating these issues as the sensitive national security issues they are, rather than to treat them in some other way.”

BJD Accuses BJP of ‘Importing’ Poll-violence Culture from UP, Bihar

FIR Against SP MLA for Using Forged Aadhaar Card for Air Travel; Party Leader, 2 Others Arrested for Helping Him