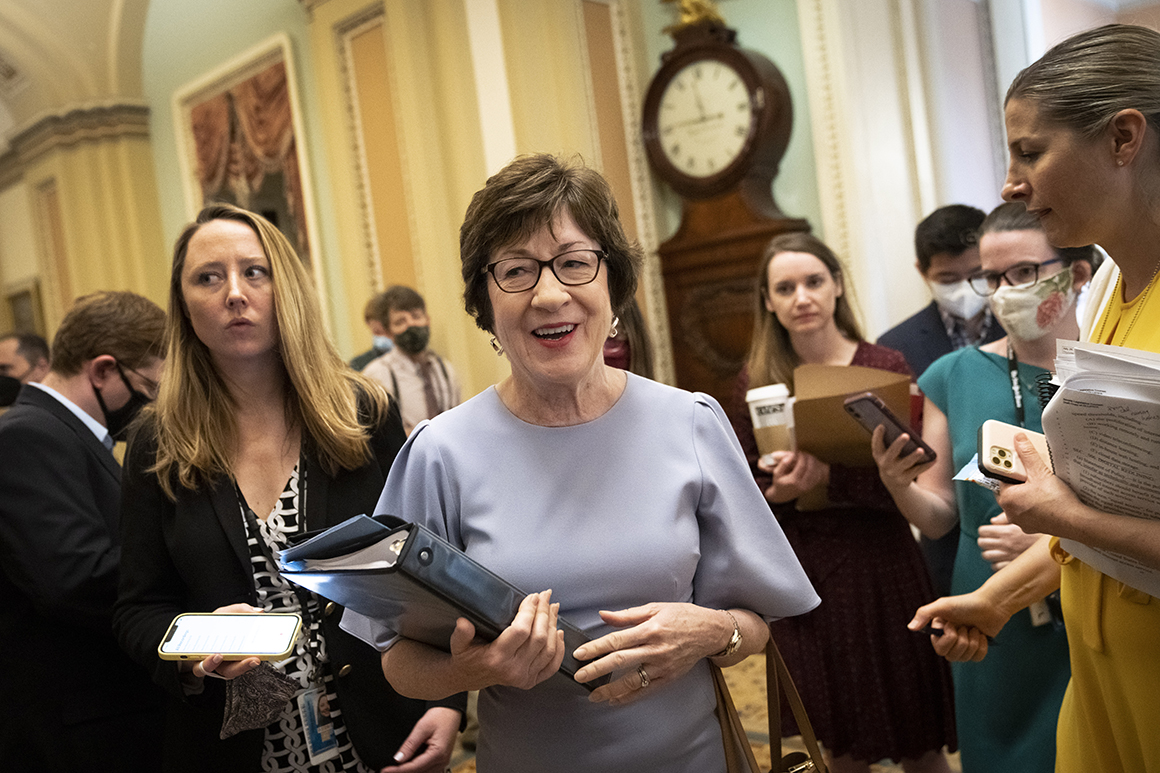 That may not be enough for most Senate Republicans, who are expected to have a competing amendment on religious exemptions to same-sex marriage protections courtesy of Sen. Mike Lee (R-Utah). Only three GOP senators are firmly backing the bill and it’s far from clear, despite expectations of success, that a total of 10 will emerge.

Right now no one knows “the exact answer” to whether the same-sex marriage measure can overcome a filibuster, Minority Whip John Thune (R-S.D.) said Thursday, adding that GOP leadership has yet to formally count the votes. He signaled where he’s leaning: “If it’s what I think it’s going to be, I’m probably a no.”

If Baldwin and Collins can’t break a Republican filibuster with their religious freedom pitch, it would mark a stunning turnaround from a July vote that saw 47 House GOP lawmakers in favor. It would also hand Democrats a potent preelection example of the GOP blocking legislation on an issue that’s broadly popular with the public. But only one Republican incumbent, Wisconsin’s Ron Johnson, is poised to feel much of a sting from wavering on the bill, and he’s indicated he would vote no on the current version.

House Democrats, who drafted and passed the original bill designed to write same-sex marriage into law, are closely watching the Senate’s potential changes. And many don’t anticipate issues with any new language, as long as it is negotiated and approved by Baldwin.

The House originally passed the same-sex marriage bill in late July, one of several bills that Democrats took up after the Supreme Court’s ruling overturning Roe v. Wade featured a concurring opinion by Justice Clarence Thomas that directly questioned other privacy-related rights, including same-sex marriage.

In a surprise to even House Democrats who drafted the bill, nearly 50 House Republicans ultimately supported codifying the rights to both same-sex marriage and interracial marriage. That unexpectedly large margin of support quickly fueled momentum across the Capitol, where Senate Democrats, led by Baldwin and Sen. Kyrsten Sinema (D-Ariz.) began working to secure enough GOP votes to send the bill to President Joe Biden’s desk.

Yet so far, only three Republicans — Sens. Rob Portman if Ohio, Thom Tillis of North Carolina and Collins — have committed to voting for the bill, with Tillis breaking from his gun-safety partner Sen. John Cornyn (R-Texas) on the matter. Sen. Lisa Murkowski (R-Alaska) has spoken positively of it and supports same-sex marriage, but hasn’t said formally that she’ll be a yes.

And there hasn’t been much public movement on the bill since the House passed it this summer. In interviews Thursday, several Senate Republicans, including Shelley Moore Capito of West Virginia, Roy Blunt of Missouri, Pat Toomey of Pennsylvania and Chuck Grassley of Iowa, all said they had no updates on their position, with several saying they needed to review the final text.

Sen. Mitt Romney (R-Utah) said he’s currently working with the bill’s proponents on the religious liberty element, “and we’ll see whether we make sufficient progress or not.”

In the meantime, many Republicans are dismissing the legislation as unnecessary, arguing that the Supreme Court isn’t expected to overturn its 2015 ruling enshrining same-sex marriage into law. Democrats counter that few thought the high court would overturn Roe until weeks before it did so this summer.

And Democrats see a political upside to squeezing Republicans on another social issue, with recent polling demonstrating that the end of Roe is expected to juice their voters’ turnout ahead of the midterms. That aspect doesn’t thrill Senate Republicans, some of whom are skeptical that the bill will ultimately get the votes to break a filibuster.

“I don’t see 10 Republicans,” said Cornyn, a former GOP whip and a close adviser to Minority Leader Mitch McConnell. “I assume if people were inclined to support it, they would have already declared in support of it.”

The same-sex marriage vote will be the first time in years that the Senate takes up standalone legislation related to LGBTQ rights. The most recent high-profile vote came in 2013, when the Senate passed legislation to prohibit employment discrimination based on sexual orientation or gender identity. While the bill ultimately failed in the House, it got support from 10 Republicans, including Collins, Murkowski, Portman and Toomey.

Proponents of the current same-sex marriage bill note that public opinion on the matter has changed drastically, especially since the 1996 passage of Senate legislation that defined marriage as occurring solely between a man and a woman. That bill, passed on an 85-14 vote, was signed into law by former President Bill Clinton. (The Supreme Court eventually struck down a key provision that barred the federal government from providing marriage-related benefits for same-sex couples.)

The intervening years have seen multiple Republican senators weigh in on LGBTQ-related cases, however. In 2017, Sen. Ted Cruz (R-Texas) led 10 conference colleagues in filing a Supreme Court amicus brief siding with a Colorado baker who refused to make a custom cake for a same-sex couple, citing his religious beliefs.

Tillis said that bipartisan negotiators plan to work through the weekend to finalize the text of the religious freedom amendment.

“Everybody’s asking me, ‘Have you got commitments?’ and I say, ‘Look, if somebody comes to me and wants a commitment, they need to [nail] down the text’,” Tillis said. When asked if he thought 10 Republicans would ultimately support the effort, the North Carolina Republican demurred: “It really depends on how we get the final language right.”

Sarah Ferris and Josh Gerstein contributed to this report.