The stories of two unhoused men on the Westside, whose lives were interrupted by grief 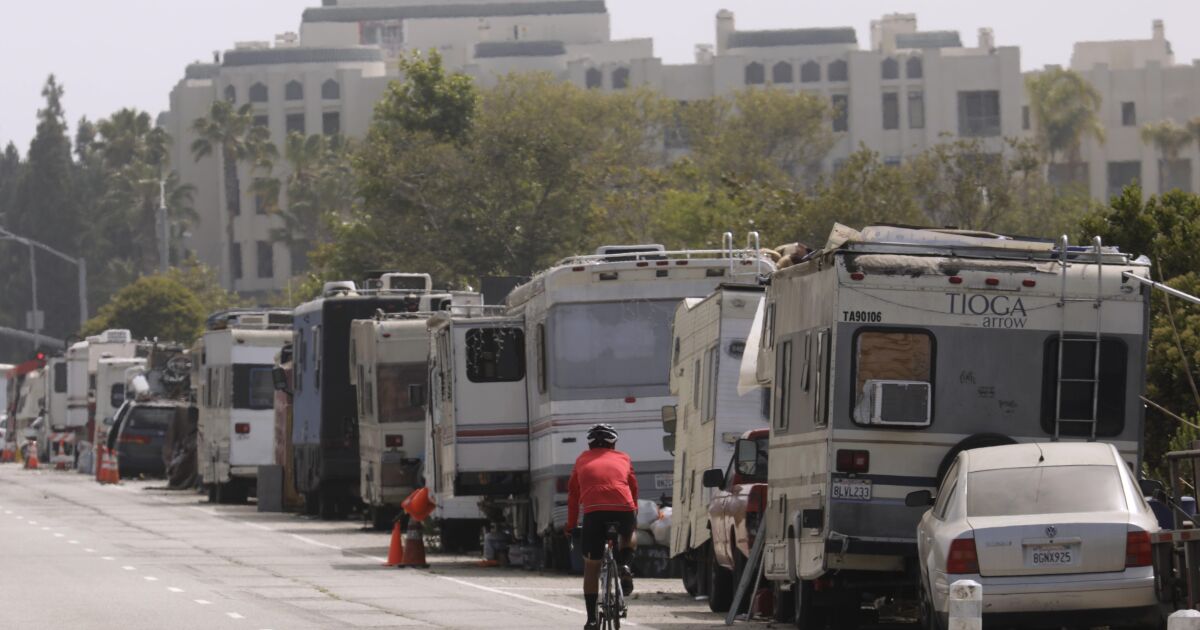 My name is Jeffrey, and I’m 60 years old. I stay here during the day, under this freeway overpass, because it’s cool, and there’s a breeze. I sleep down the street. I don’t make a mess anywhere I go. I carry everything I need in this bag. No one gives me any trouble because I keep it clean. If you’re clean, and you’re not causing any trouble, the police tend to leave you alone. I’ve been living on the streets for about three years, but I’m close to getting Social Security — and they owe me for seven years, so that will help get me back to Arizona, where I’m from. It’s within reach. I just heard from them. I should get my money by Oct. 3.

I grew up near Tucson. I came out here for a job that didn’t pan out. Then I started having problems with my hip, then my knee. I’ve been through hip replacement surgery, and I need knee replacement surgery. Also, three years ago I lost my wife to cancer. I’d taken care of her for six years. After she died, I went through a lot of money I shouldn’t have gone through. I didn’t spend it on drugs or alcohol; I’ve never been much of a partier. I spent it on things like staying in hotels, and eating well. I was missing her. I was grieving. After that, I realized I needed to get away. So I came here for the job, but it didn’t pan out.

I worked in the music industry — security, protecting the bands from the fans. Styx, Journey, Def Leppard. I did one Shania Twain tour. It was her first tour, and everyone was amazed she was already a headliner. My dad was a cop, and he made extra money working concerts. When I was old enough, he got me into it. The main band I worked with, for many years, was Styx — one of the rare bands that didn’t use any drugs.

I graduated from the same high school as Linda Ronstadt — Catalina High in Tucson. I had lots of friends there, and I’m actually still in touch with one, Pete. We met in the third grade. We still talk on the phone. I got my phone with the General Relief fund, which you can get at Social Services. They also give you food stamps, and there’s a hot food program, too. The hot food around here is mainly fast food, though, so I tend to buy stuff at the store and just heat it up myself. I have a single-burner stove. Sometimes I also watch movies on the phone. I just saw the new Elvis movie. The guy impressed me that played him. He doesn’t really look like Elvis, but he kind of captured his essence.

I don’t think I can go back to concert security. I still have to get my knee replaced. For concert security, you have to be quick on your feet. After the knee surgery, I might manage a bar that my cousin owns, near Tucson. I’m not a drinker, so I’d be perfect for that job. That’d give me something to do where I wouldn’t be running up and down stairs.

One reason it’s hard is because I don’t talk to that many people. I used to talk to my wife.

How did I meet my wife? I was 22, in New York. I was with Pete, and we were walking around lower Manhattan. He was living there, showing me around. I saw this girl, and I said to Pete: “Wow, look at her.” She was wearing a white dress, a bit above her knee. Pete said: “You would never stand a chance.” I walked up to her and talked to her. I told her she had the most beautiful blue eyes I’d ever seen — because she did. Lisa was Italian, from Bensonhurst. After that we kept in touch. Eventually, I moved to New York. After the first winter, I said to Lisa: “I don’t know if I can live here, because I’m freezing to death.” Tucson can get cold. Some days it can get down to 17 degrees. But in New York City the high can be 17. Also, it’s so crowded, like it is here. That’s why I like Tucson; there’s more room. And it’s so much more affordable. Anyway, after about a year, I asked Lisa to marry me, and she said yes. Then she said: “By the way, we can move to Arizona. I’m sick of this cold, too!” (She hated shoveling snow.) In Tucson, she said: “It’s hot, but I can deal with it.” She became a nurse, and we had four daughters.

The twins are in the Air Force now. They’re overseas, so it’s hard to talk to them. But I talk to the other two, two or three times a week. They sort of know where I am, but they don’t know everything. What they do know is that I want to get out of this by myself. I don’t want their help.

I owned a house with Lisa. When she died, I sold it and gave all the money to the girls for their education. Still, I feel they shouldn’t bear financial responsibility for me. I’ve been in touch with my sister, in Arizona, though. I might move in with her, in October, when I get the Social Security money. It’s getting hard for me out here.

One reason it’s hard is because I don’t talk to that many people. I used to talk to my wife. She knew me better than anyone. I think I knew her better than anyone, too. Sometimes I still talk to her, in my mind. Sometimes people tell me, you need to meet somebody. I say I had somebody. I don’t think I’ll find that again. We were soulmates. I think God put her in my path, I really do. If you’re a good person, good things will happen to you. She was an identical twin, and one time her sister bet her $100 that she could fool me. I got home, and her sister was wearing one of her dresses. I said, “Hi, babe!” But when she kissed me, I knew. She said, “How’d you know?” I said, “Because you don’t kiss me the way Lisa kisses me.” And no one ever has.

When I get to Arizona, the first place I’m going is the cemetery. It’s not just to pay my respects to Lisa. It’s for my parents, and my grandparents, too. I have eight graves to visit. Even though my grandmother died in 1985, I still want to pay my respects. My dad’s there, too. He lasted until 2007, when he was 78. He passed away Christmas Eve. He just went to sleep, and he didn’t wake up. I told my sister that’s how I want to go, when my time comes. Just go to sleep, no pain. I’m the one who found him. At first, I thought he was sleeping. Then I realized. I just sat there for a minute, looking at him. He had a peaceful, serene look on his face. You know he wasn’t in any pain, because you’d be able to see that.

Granderson: The late Irene Cara and ‘Fame’ were so much more than a fad