Tom Brady happy to have key offensive lineman back ahead of playoff game: ‘It’s a big boost for us’ 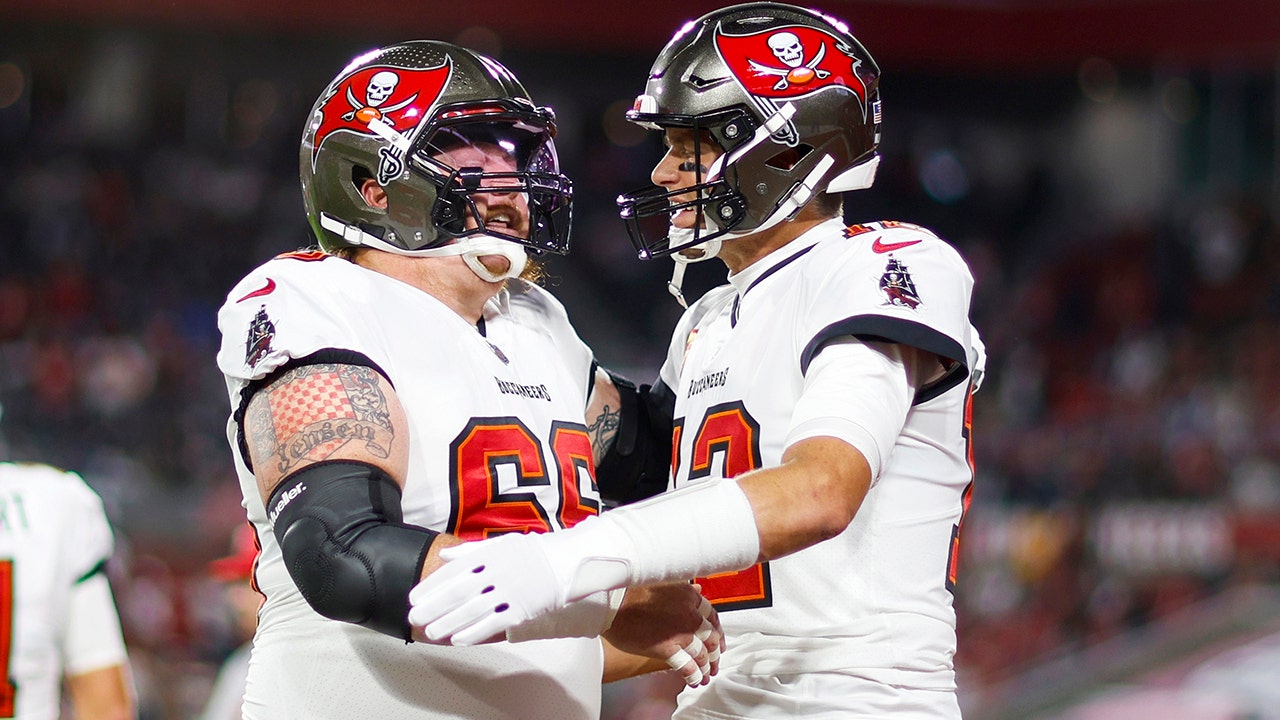 Tom Brady and the Tampa Bay Buccaneers received some reinforcements on the offensive line ahead of Monday night’s NFC wild-card matchup against the Dallas Cowboys.

The Buccaneers activated center Ryan Jensen from the injured reserved ahead of the game. Jensen had missed the entire regular season with a severe knee injury, which he suffered on the second day of training camp. Not having a veteran like Jensen hampered the Buccaneers’ offense all season.

While Brady played well in the 2022 regular season, the team still finished 8-9. Tampa Bay somehow managed to win the NFC South and get a playoff game after all of the ups and downs.

Ryan Jensen #66 and Tom Brady #12 of the Tampa Bay Buccaneers embrace on the field prior to a game against the Dallas Cowboys in the NFC Wild Card playoff game at Raymond James Stadium on January 16, 2023 in Tampa, Florida.
(Mike Ehrmann/Getty Images)

Brady talked about Jensen’s return in the latest episode of the “Let’s Go!” podcast.

“It was a big blow to us in training camp when he got injured, and we thought he would be out the entire season, and he was out the entire regular season,” Brady told sportscaster Jim Gray. “But it turns out he found his way back for this game. And it’s a big boost for us because he’s got a great attitude and he’s an incredibly talented player and he adds a big presence to the middle of our offensive line.

“And his toughness and his attitude is unmatched. And [Robert] Hainsey did a great job stepping in for him all year. I don’t know who’s going to ultimately play the bulk of the game, you know, obviously we hope Ryan can go the whole game. Who knows? I don’t know what’s going to happen. But, you know, Hainsey is there ready to go, too, so we’re in a good position at the center position, which has been a challenge for us all year.”

Tampa Bay beat Dallas, 19-3, at the beginning of the season, but Cowboys quarterback Dak Prescott got hurt in that game.

TOM BRADY ‘DEFINITELY DID RIG THE SYSTEM TO GET INTO THE PLAYOFFS,’ ROB GRONKOWSKI JOKES

“I think our defense obviously played great, giving up three points against Dallas’s offense, and they’re very talented,” the superstar quarterback said. “They’ve got a really good coordinator. They’ve put themselves in good positions. Dak’s a hell of a quarterback. They’ve got good running backs, [Tony] Pollard and Zeke [Elliott], good receivers, a good line. They’ve been beat up a little bit on their o-line, but, you know, I’ve got their defense to deal with.”

“Micah Parsons is a hell of a player. [DeMarcus] Lawrence is a great player. [Leighton] Vander Esch is a good player. They got Trevon Diggs in the secondary. They’re very talented. They make plays. If you mess up, these guys take advantage. And I think the important part for us is to play really sound football. We’ve always said you can’t win ‘til you can keep from losing. This is so evident in playoff football. You know, how do we just play a good solid, clean game, make the plays that are there, punt if we need to, you know, if we got to settle for a field goal, that’s OK. But this is a team that we expect to play their best football, too. So, it’s going to be a hard-nosed, tough game, and I certainly hope that we make enough plays to come out ahead.”

Tom Brady #12 of the Tampa Bay Buccaneers look to throw against the Dallas Cowboys during the first half at AT&amp;T Stadium on September 11, 2022 in Arlington, Texas.
(Tom Pennington/Getty Images)

Tampa Bay finished 15th in yards gained and 25th in points scored during the season.

Ryan Gaydos is the sports editor for Fox News Digital.