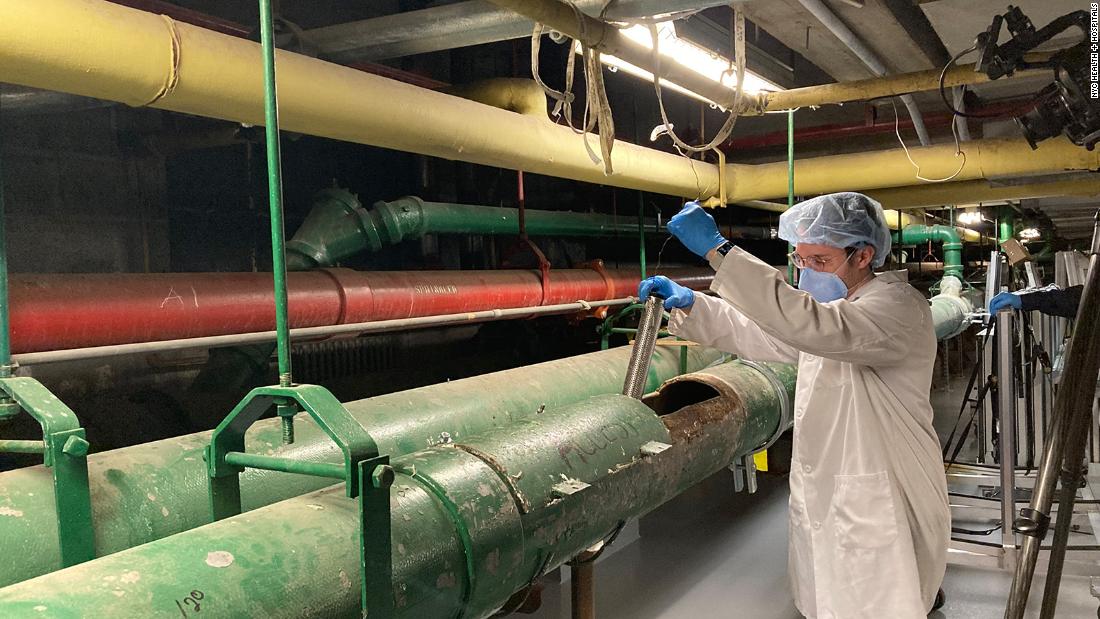 Some disease detectives in the United States are narrowing their wastewater surveillance efforts to zero in on specific buildings and to identify hot spots for a growing list of diseases.

“Some wastewater surveillance is done at the community level, and some is done at the building level, which is a little bit better nuanced in terms of trying to target messaging,” said Lori Tremmel Freeman, chief executive officer of the National Association of County and City Health Officials.

“For example, in some of our jurisdictions, they’ll monitor a large hotel or a prison setting,” she said. “If it pops up there, you can target messaging directly to that building.”

A building-level approach to wastewater surveillance is underway at all 11 hospitals within the NYC Health + Hospitals integrated health care system in New York City.

The system launched a surveillance program in February to test sewage for coronavirus and flu viruses in wastewater from its hospitals, and the program expanded in August to include testing for polio and monkeypox, according to a company announcement.

“With the increase in rapid tests and the decline of federal funding for the Covid response this spring, wastewater testing was an affordable, easy way for us to track the presence of Covid in the community without needing patients to take a test,” Dr. Mitchell Katz, president and CEO of NYC Health + Hospitals, said in the announcement. “Now, with the arrival of monkeypox and polio in New York City, we have a system in place to test for those viruses and use that data to inform our response.”

Using the wastewater testing data, “we’ve been able to tell about 10 to 14 days prior to when we’re going to see an onset of having our patients show up sick,” Silvera said.

“People are shedding the virus when they use the bathroom,” she said. “So if we’re testing our wastewater, then we can tell whether or not there’s an uptick in virus in the community at that given point. And then it ends up showing when people start presenting symptoms 10 to 14 days later.”

Silvera described the wastewater surveillance data as giving clinicians a warning signal of a potential increase or decrease in disease, which can help inform efforts toward preventing or treating illness and surging staff and supplies to meet needs.

With the ongoing global monkeypox outbreak and a recent detection of poliovirus in New York City sewage samples, Silvera said that it was “natural” for the NYC Health + Hospitals wastewater surveillance program to evolve to include testing for those viruses.

Searching for understanding in sewage

Wastewater surveillance involves testing sewage to determine whether feces and other types of human waste in untreated sewage contain genetic material from viruses or bacteria that can make people sick. That material, either RNA or DNA, can be detected in wastewater — but it does not indicate whether the pathogen is infectious in the water itself.
“We’re really focused on understanding what is the burden of disease and how much disease is in the community with these measurements,” said Marlene Wolfe, an assistant professor of environmental health at Emory University and co-principal investigator for WastewaterSCAN, a national wastewater surveillance initiative.

“Wastewater surveillance, the reason it works so well is because everyone in the community is contributing their sample to the sewer system daily,” she said. “For some places, that might be most of the population of the county is contributing to that one plant, and for some places, it might be that even in just one city, there are several plants that are covering different parts of the population.”

Then, of course, there could be surveillance at the building level, such as in a hospital.

Sampling wastewater at different levels within a community can range from “the treatment plant being the highest level down to an individual building,” Wolfe said. “There’s also kind of an in-between level, which is within the sewer network.”

Wastewater surveillance dates to the 1940s, when researchers used it to find carriers of the bacteria that cause typhoid fever or to detect polio.

Since then, wastewater surveillance has been used to help with tracking infectious diseases on a global scale — but the technique was far from mainstream before Covid-19 emerged. This coronavirus is the first respiratory virus tracked with wastewater, Wolfe said.

In response to the pandemic, the US Centers for Disease Control and Prevention launched the National Wastewater Surveillance System in September 2020. Local public health departments use it to submit their wastewater testing data to CDC. The system analyzes that data and reports the results back to the health departments for use in their Covid-19 response.
A survey of 194 local public health agency leaders, published by the Rockefeller Foundation in April, found that although 38% have monitored wastewater for the virus that causes Covid-19 at some point during the pandemic, only 21% reported that they are likely to monitor their wastewater after the pandemic wanes.

“That survey from Rockefeller was really well done, but the surveys mostly were completed prior to the Omicron surge. That surge was a time when we anecdotally saw a significant increase in interest from public health departments using the information and the media and the public showing interest in the data as a trustworthy source,” Wolfe said.

She hopes wastewater surveillance can continue to be utilized as a public health tool.

The WastewaterSCAN initiative, based at Stanford University and completely separate from the CDC’s system, launched in November 2020 to scan sewage samples for SARS-CoV-2, the virus that causes Covid-19. Since then, the program has expanded to monitor more sewage plants and track more pathogens.

As of last week, the initiative — which involves a partnership between universities, nonprofits and the research company Verily — monitors 48 treatment plants across 16 states for the coronavirus and its BA.4 and BA.5 subvariants, as well as monkeypox, influenza A and respiratory syncytial virus.

When new threats emerge, it is “relatively easy” to use wastewater samples from the initiative to immediately test for whatever that threat might be, Wolfe said.

“That’s what we were just recently able to do for monkeypox, which was really exciting because we were able to roll it out very quickly, and we saw in a number of places, including Atlanta, that we had monkeypox DNA detectable in the wastewater from the time we started monitoring, which was pretty early in the outbreak,” she said. “That’s the advantage of having this kind of population-level network that allows us to speak to the overall trends in infectious disease outbreaks.”

‘If you don’t look for something, you’re not going to see it’

Wastewater surveillance has proved to be useful at a time when it’s been critical to monitor for pathogens that are not typically seen in the United States, such as polio and monkeypox, said Dr. Daniel Rhoads, vice chair of the College of American Pathologists Microbiology Committee.

Clinically, in the United States, “we stopped testing for polio because polio was gone. We never tested for monkeypox because it’s a zoonotic disease to an endemic area within Africa, so we didn’t even need to concern ourselves with it on a day to day,” said Rhoads, who is also a pathologist at Cleveland Clinic in Ohio.

Yet wastewater surveillance “opens our eyes collectively — medicine, public health and society — and makes us realize that if you don’t look for something, you’re not going to see it,” Rhoads said.

“With surveillance in general — and maybe wastewater surveillance specifically — I expect there’s going to be more meta-genomic analysis of wastewater where people aren’t looking for a specific pathogen. They’re just looking to see what’s in there and is there anything surprising in there. And so, we as a society should not be too surprised that there are pathogens out there that we haven’t recognized,” he said. “Hopefully, this type of surveillance will enlighten us, and then we can develop tools to help at an individual level to diagnose and eventually treat these emerging diseases caused by these pathogens.”