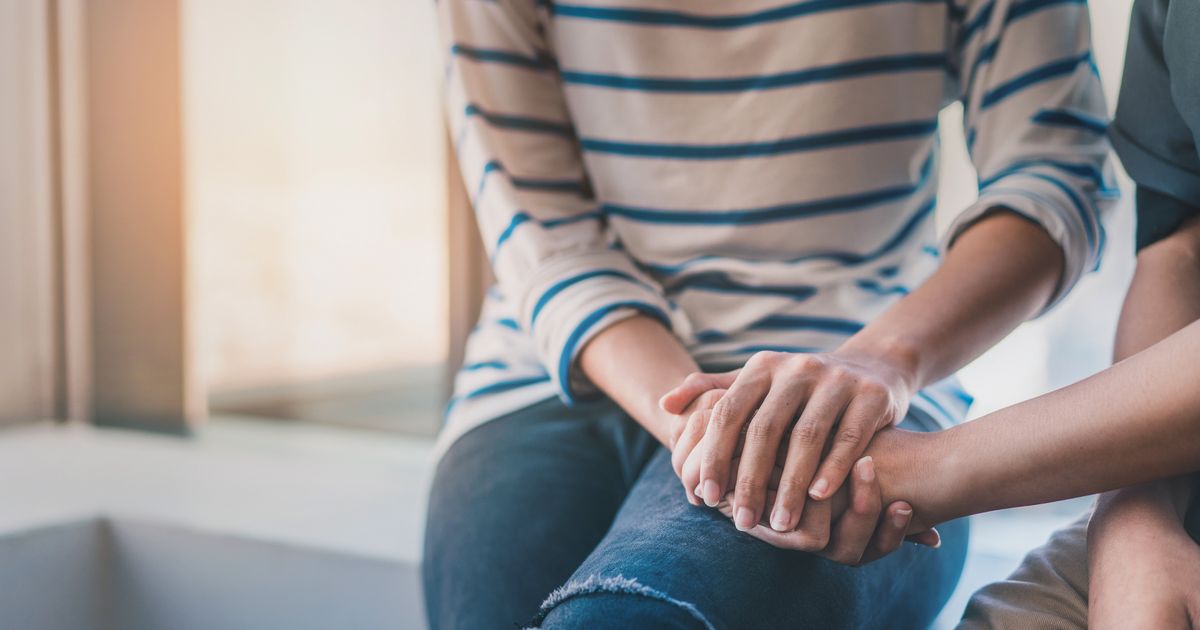 Losing a loved one to suicide is a particularly painful and complex grieving experience.

“Those who are struggling with the loss of someone to suicide experience extreme emotions ― guilt, fear, anger, shame, sadness, loss, etc. ― and they often feel very alone,” Dan Reidenberg, executive director of Suicide Awareness Voices of Education, told HuffPost. “Suicide loss survivors often think people close to them don’t know what to say and therefore don’t say a lot, which only increases their sense of shame and humiliation.”

Loved ones are often left grappling with impossible questions, feelings of regret and blame, and a sense of isolation. Unfortunately, the people around them may say things that reinforce negative beliefs and emotions as well.

“Language can perpetuate confusion, misinterpretation, lack of understanding and the fear around the issue of suicide,” Reidenberg said. “Understand that the person who lost someone to suicide is likely to be having a very difficult time making sense of the world, their loss and even how to accept supportive comments from others. Thus it is helpful to be aware of the common reactions someone might have after losing someone to suicide and how you can best be there for them with words that help, support and show you care.”

Of course, there’s no perfect thing to say in this heartbreaking situation ― and most attempts at comfort are incredibly well-intentioned. That said, there are some pitfalls to avoid.

“It is important to be mindful about how you talk about suicide, ensuring the words we use don’t increase hopelessness and stigma but, instead, offer survivors of suicide loss with a safe space to land as they navigate their own grief,” said Kim Torguson, director of engagement and communications at the National Action Alliance for Suicide Prevention.

Below, experts share the words that are not helpful and their advice for how to approach a grieving loved one.

“We sometimes act impulsively when responding to someone who lost a loved one by saying that we know how they feel or that things will get better in time,” said Nance Roy, chief clinical officer at the mental health organization The Jed Foundation. “But unless one has lost someone to suicide themselves, they will not really know how it feels or when and how time may help.”

Avoid giving generalized advice like “time heals everything” or predicting the course their grief journey will take. Remember that everyone’s situation and response is complex and different.

Instead of immediately bringing your own emotions into it, ask your loved one how they feel.

“Make sure that you are expressing yourself with compassion [and] care and convey that while you might not know exactly how they feel, you do care and you do want to be there for them,” Reidenberg said. “Being there means being available when they need to talk and being willing to listen, empathetically. Often it is less about what you do say and more that you are willing to listen to their pain.”

‘At least they’re no longer in pain.’

“It is important not to make statements such as ‘they are in a better place now’ or ‘they are finally out of their pain,’” Reidenberg said.

A “better place” comment is particularly unhelpful if your friend has different spiritual beliefs, so keep that personal religious outlook to yourself.

“Saying things like ‘at least he/she/they are no longer in pain’ can be difficult for a loved one to hear, even if it is meant with the best of intentions,” added Racine Henry, a therapist and owner of Sankofa Marriage and Family Therapy. “The idea of a pain so profound that it results in the loss of someone who is loved may not make sense to a person who has never considered suicide as an option.”

‘That was selfish of them.’

“It’s important to avoid framing someone’s death by suicide as ‘selfish’ or ‘cowardly,’” Torguson said. “People who die by suicide are in extreme pain, feel like they are a burden to others, and often see no alternate way to move forward.”

Describing the person who died as selfish or cowardly is judgmental and ignores the reality there’s a severe psychological and physical condition they’re experiencing. While a loved one grieving the suicide might express these sentiments, it’s not your place to say that to them.

Rather than passing judgment on the way their life ended, try to focus on the person who was lost.

“I would be sure to acknowledge more of the deceased’s life beyond how they died,” said Doreen Marshall, vice president of mission engagement at the American Foundation for Suicide Prevention. “Say the deceased’s name, share memories with their loved ones, and recognize that the person who died had a life that was so much more than just how they died.”

“It’s important to try to avoid oversimplifying suicide by trying to attribute someone’s death by suicide to a single cause or circumstance ― such as a relationship ending, job loss or bullying,” Torguson said.

Those who’ve lost a loved one to suicide may try to make sense of why it happened and struggle with many unanswered questions. Your guesses about a specific reason for their suicide are not helpful and show ignorance of the complexity of the issue.

“I would avoid anything that indicates that this was a death that had a single cause,” Marshall echoed. “Suicide occurs due to complex biological, psychological and environmental factors that converge in an individual in a moment where they believe there is no other option to end the pain they are in.”

‘Is there anything you wish you had done differently?’

“It is imperative not to imply that the person who lost someone to suicide might have been able to intervene,” Roy emphasized.

Many people already wrestle with feelings of self-blame even without these kinds of questions and comments from others.

“Suicide is a complex, multi-faceted public health issue that often leaves a wave of complicated grief for those left behind — family members, friends, colleagues, neighbors, etc.” Torguson said. “Survivors of suicide loss are often left grappling with questions such as ‘why?’ ‘what could I have done?’ or ‘how did I miss the warning signs?’”

Ruminating over all the weeks, months and years leading up to the loss doesn’t lead to healing, so don’t encourage this.

“You should definitely not blame anyone for the loss, including the person who has passed away,” Henry said. “It won’t be helpful to go over all the things that could have or should have happened differently.”

Similarly, Reidenberg advised against saying, “You tried everything that you could to save them.”

“You definitely do not want to imply or give the perception that the person who has died did so to make someone angry or to get back at them in revenge,” he explained.

Instead, try to remove any notion of blame from the equation. Provide a safe space for them to share their emotions and offer whatever support you can.

“While we want to talk openly and honestly about suicide and suicide prevention, it’s important to keep in mind that the words we use can either promote hope and help-seeking or further stigmatize those who may be struggling or cause those who have lost someone to suicide to feel judged or ostracized,” Torguson said.

Phrases such as “committed suicide” or “successful suicide attempt” may seem like innocuous statements of fact. But experts warn that these word choices can be harmful by adding to the stigma around mental health struggles and preventing people who are struggling from seeking help.

“I would avoid any judgmental language,” said Dr. Jacek Debiec, an assistant professor in Michigan Medicine’s department of psychiatry. “For some people, the phrase ‘to commit suicide’ has judgmental connotations. ‘Commit’ is often used in the context of committing a crime.”

Reidenberg echoed that sentiment, noting that “commit” tends to be associated with a crime or a sin. We don’t say someone “committed” heart disease or cancer.

Instead, the phrase “died by suicide” is preferred. Reidenberg also advised against using the word “successful.”

“‘Successful’ implies the person was successful, they achieved or accomplished something,” he noted.

“It is best to not say ‘they were crazy’ or ‘they must have been out of their mind to do that,’” Reidenberg said.

Again, avoid disparaging the person who has died, as this adds to the stigma around mental health struggles ― and also creates an uncomfortable environment for discussing the complicated emotions around grief.

“We should be mindful that any language that conveys judgment about the person who died or the suicide itself is likely to leave the griever feeling more alone with their grief and less likely that you will be a person they turn to as they try to understand what has happened and why,” Marshall said.

What to say and do instead

Remember, your grieving loved one is suffering immense pain that will come and go in waves. Speak to them from a place of honesty and sincerity ― and know you don’t have to have all the answers. There’s no one right thing to say in this situation.

“If we do not know what to say, but we feel that we should say or do something, a tender gesture of care may be better, such as sending flowers or a card,” Debiec said. “Admitting, ‘I don’t know what to say, but I am here for you and will be here for you if you need me,’ is better than reciting a prepared script. Our empathy will find its way to the person in grief.”

Continue showing up and reaching out. In addition to asking if there’s any way you can help, suggest specific things you can do.

“They may not be in a mindset to know how you can help exactly, so offering to help with concrete tasks like getting groceries, helping with child care, etc., can be very helpful,” Roy said.

Help them find professional support like individual or group therapy if they express interest. And, ultimately, the most important thing is just to be there.

“Social connection is a key protective factor against suicide, so if you know someone who has lost a loved one to suicide, keep showing up, reaching out, and being there for them,” Torguson said. “Letting them know that you care and are available to listen non-judgmentally can be exactly what they need in their time of grief.”

If you or someone you know needs help, dial 988 or call 1-800-273-8255 for the National Suicide Prevention Lifeline. You can also get support via text by visiting suicidepreventionlifeline.org/chat. Outside of the U.S., please visit the International Association for Suicide Prevention for a database of resources.