What to know about mooncakes 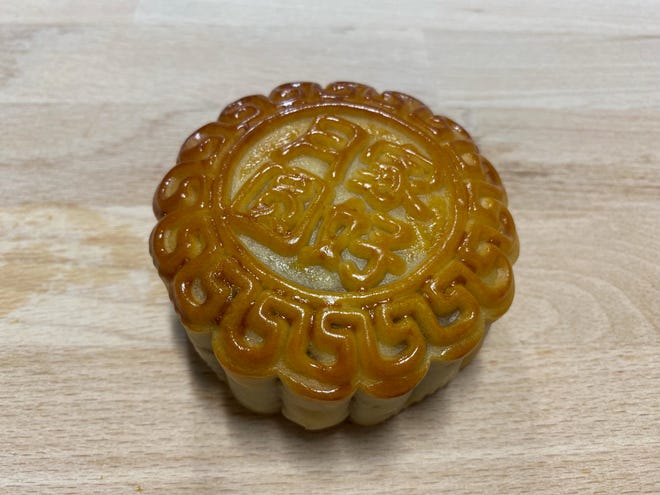 Cutting into a rich mooncake while having tea steeping as you admire the moon is just one way East and Southeast Asians celebrate the Mid-Autumn Festival, the Salem Statesman Journal, a USA TODAY Network publication, reports.

The Mid-Autumn Festival celebrates the end of the autumn harvest in line with the full moon. In accordance with the Lunar calendar, it occurs on the fifteenth day of the eighth month. Because it is based on the Lunar calendar, its Gregorian calendar date changes every year. The holiday also is called the Mooncake festival in Chinese, and similar Mid-Autumn festivals celebrated include Tsukimi in Japan, Tết Trung Thu in Vietnam, and Chuseok in Korean.

Mooncakes are wheat flour cakes, pressed with intricate designs on top. They typically have sweet fillings, the most popular including mixed nuts, lotus seed paste, red bean paste, and mung bean paste. There is a rapidly expanding list of fillings, including durian and tarp, as different types of mooncakes are being created.

Despite being sweet desserts, they are not technically “sweet” in comparison to traditional frosted cakes. The standard bean fillings make for a starchier, dense cake. Their flavors are borderline savory.

Across China, Taiwan, Vietnam, Macao and other countries that celebrate Mid-Autumn Festival, there are distinct types of mooncakes and flavor profiles.

Mooncakes come in many variations

Eating mooncakes has been a Mid-Autumn Festival tradition for centuries. As taste profiles continue to evolve, mooncakes of varying types have become available.

The top three types of mooncakes are assorted nuts, lotus seed paste and red bean paste. These often include the addition of one, two or even four salted egg yolks.

Assorted nuts is an oversimplification of the Chinese translation of “five types,” referring to the common five ingredients: walnuts, almonds, Chinese almonds, sesame seeds and pumpkin seeds. Through the years, more ingredients were added to the filling. Now, there are various dried fruits, nuts and other grains inside of this type of mooncake.

There are a lot of textures depending on the types of nuts, but it’s usually a lighter flavor despite how dense it appears. A mooncake can also be sticky if it has golden syrup in it, if it does, it will also be sweeter.

Lotus seed paste provides a mild flavor. Red bean paste deceivingly looks like chocolate when you cut into it because of how densely it is packed into the mooncake. Other beans are often made into paste to be used as mooncake fillings, the most common include winter gourd and mung bean.

Salted egg yolks might seem strange to add into a sweet pastry, but many Asian desserts border on a subtle sweetness that is almost savory. The addition of salted egg yolks helps to provide texture and additional flavor to the sweetness and density.

Though there are more filling flavors wildly available now, you previously could only find them from specific regions or countries. For example, durian mooncakes were only available in Southeast Asian countries like Thailand, Vietnam and Malaysia, since the fruit is grown there.

Even if there are no nuts in a mooncake, it is not advised to eat them if you have a nut allergy because many mooncakes are produced among nut-filling mooncakes. Also, there are not many types of mooncakes that are vegetarian, vegan, or gluten-free.

You shouldn’t pick up a mooncake and take a bite out of it. That’s rule number one.

morgan rewroteMooncakes are meant for sharing. Even though a mooncake may appear as if it’s the right cake size to satisfy one person, it’s better to share. Instead of consuming one mooncake in full, cut each into sixths or eighths and enjoy the varying flavors of the different kinds of cakes.

They’re also great paired with a cup of tea.

If you end up with leftover mooncake, wrap with plastic and cover or store in airtight containers at room temperature for up to a week. If you wish to keep them longer, store in the refrigerator. This applies to most types of mooncakes unless the packaging says otherwise.

Check out these recipes to up your kitchen game:

CeramicsFest is back in the city after a two-year break

How to care for your leather wardrobe items | Fashion Trends