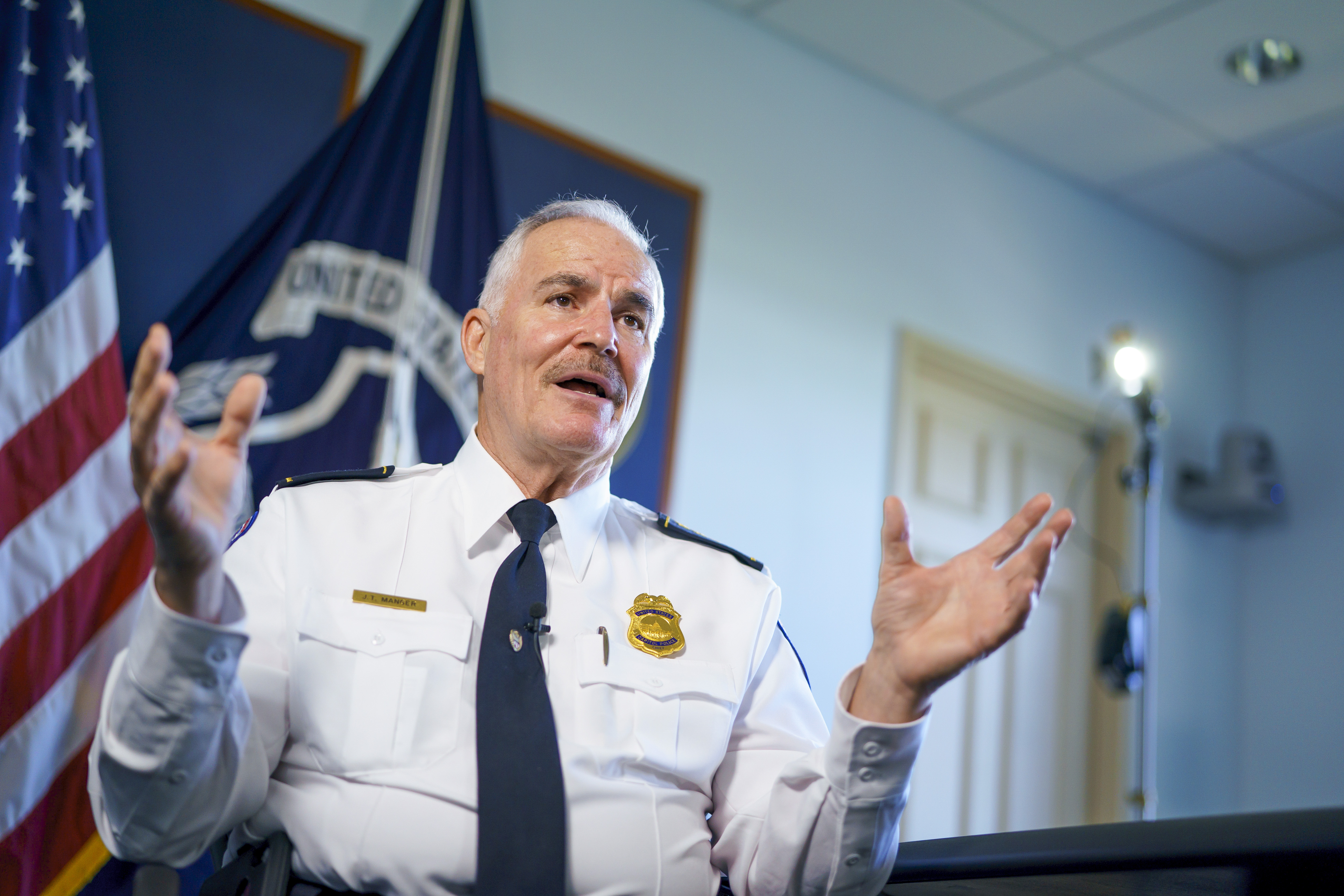 Manger came out of retirement last year to take over a department reeling from the Jan. 6 attack on the Capitol. Morale had hit rock bottom, with employees leaving an already overworked force in droves and with constant concerns about officers’ safety and mental health. He pledged to tackle drastically needed reform, quickly, and a little over a year into the job he’s had some success, even as he’s had to avoid near-constant political booby traps on both sides of the aisle and looming GOP investigations if the party takes control of the House.

“I can’t control any of that,” he said of House Republicans’ potential investigations. “The finger-pointing at everything that went on right after Jan. 6 about whose fault was what and where blame lies and that sort of thing — hopefully those discussions have sort of taken a backseat to look, ‘here’s what we’ve done to improve things.’”

When it comes to the Capitol’s many partisan controversies, its chief of police would prefer to avoid weighing in at all.

He said it was Republicans’ call on whether the metal detectors currently ringing the House chamber would come down. They were installed after Jan. 6 to screen members of Congress and staff after Democrats expressed concerns about safety, and have become an object of GOP ire.

And in response to Democratic concerns about collaboration between the Capitol Police and rioters, Manger said: “Aside from a couple of cases where disciplinary action was taken, it was pretty much determined not to be an issue.”

He expressed confidence Tuesday that he’d been able to make concrete changes at the 2,300-strong department that had faced heavy scrutiny after the Capitol riot. Manger had mended bridges with the force’s union, he said, which had taken votes of no confidence in the department’s leadership after Jan. 6. He also cited changes to the department’s operational planning, intelligence sharing and staffing as the most important reforms he’d accomplished so far.

“I felt like the first year that I was here, I needed to fix the immediate problems that were at the heart of the failures from Jan. 6,” he said. “Now, I want to spend this next year better positioning the department for the future.”

One of his most controversial changes, a decision to hire private security contractors to fill in staffing gaps, had angered the Capitol Police’s union, which argued the private security wouldn’t meet the same standards as uniformed officers. Despite their protests, a little over 50 private security officers are now working around the Capitol complex, Manger said, where they perform jobs such as ID checks — on people who had already gone through a security screening.

Manger defended the use of the private contractors as essential to free up officers for other duties and stressed that their role, while a “temporary solution,” could perhaps be necessary for a “couple more years.”

“Once we get to the level where we’re not stressing about staffing every day, then we can start to look at ‘OK, can we start scaling back the contract security officers and put Capital Police officers at some of these posts,’” he said.

The reopening of the Capitol to tourists and visitors, which eventually started in March, had been hampered by a lack of officers. There’s still limits on the hours and number of tours offered, compared to before the pandemic, but the Capitol Police chief was confident that they could fully reopen the Capitol campus and restart more tours at pre-Covid levels, “hopefully, by the end of this calendar year.”

In the first year on the job, he said, he’d focused on filling rank-and-file officer positions and had avoided promoting officers into more senior roles to prevent exacerbating vacancies lower in the ranks. This meant that more senior positions in the department remained in acting roles and meant “we’ve had a year of no promotions,” he said. Now, he wants to focus on organizational changes and promotions in the upper ranks of the department.

“With staffing increasing a little bit every month, we are going to start to be able to fill some of those upper level positions and some of the first-line supervisor positions. So I’m finally going to be able to start promoting sergeants and lieutenants and inspectors and captains,” he said.

Manger also discussed the department’s opening of its first two field offices meant to bolster efforts to address rising threats to lawmakers in Washington, D.C., in California and Florida. Many violent threats against members of Congress originate out of those two states, Manger said. The offices, staffed with at least two officers and an attorney, were meant to help investigate and prosecute people who made such threats — which are “far more” than the department dealt with four or five years ago, according to the chief.

Despite the challenges — old and new — the chief said he plans to stay as long as necessary to right the department’s course.

“These are things that are going to take a while. I do hope this is my last job,” he continued. “But I think that I could easily be here for a few more years.”

In Neck-and-Neck Himachal Pradesh Election, A Look at 5 Rebel Leaders, Who Can Make a Difference