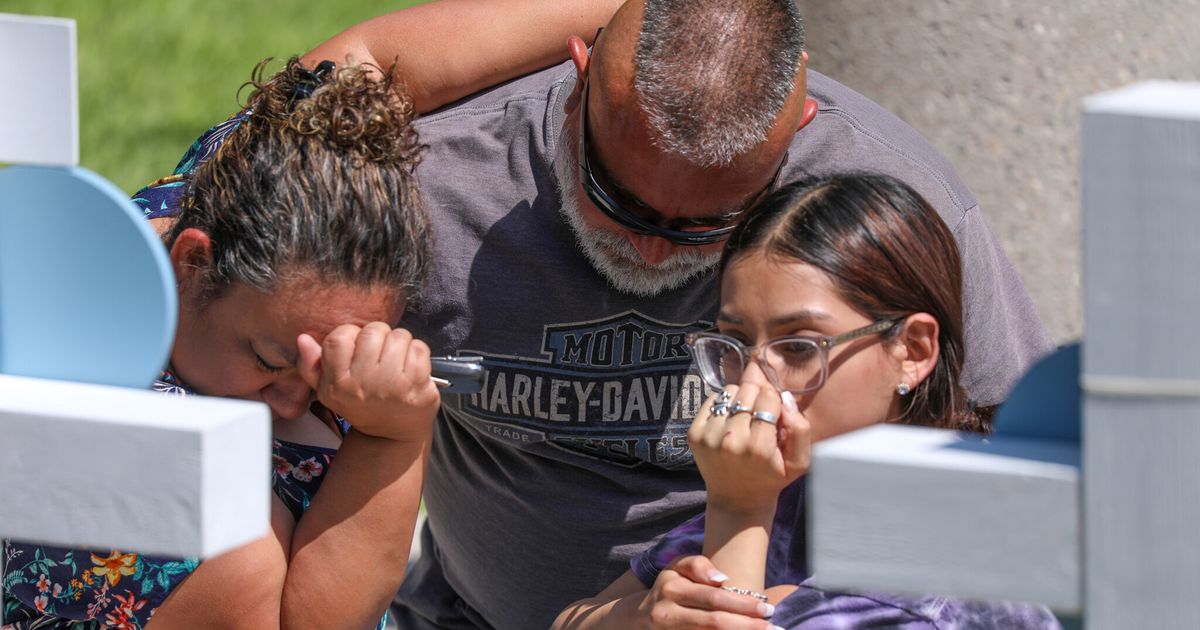 Twelve hours after a gunman walked into Robb Elementary School in Uvalde, Texas, and killed 19 students and two adults, I learned that he was “lonely” and “bullied” for a stutter and a lisp. I learned that the 18-year-old mass murderer used to play video games like Fortnite and Call of Duty. I learned that the monster at one point used a knife to cut his own face. I learned that on his 18th birthday he purchased two assault rifles that he took photos of and posted online with the caption “my guns.”

This is not because I lack sympathy. It’s because all my sympathy is used up on the carnage he left behind. I care that Jacklyn Jaylen Cazares, 10, had the whole world in front of her and that she would help anyone who needed it. I care about her cousin Annabelle Rodriguez, also 10, who was killed in the massacre with her.

And he, whose name I will not mention in this piece because he will not gain infamy from my story in death, doesn’t get to do this. Just because you’ve had it tough, you don’t get to inflict pain and misery onto the rest of the world.

“He was the nicest kid, the most shyest kid. He just needed to break out of his shell,” his friend told The Washington Post.

You know who else was a nice kid?

Eight-year-old Uziyah Garcia, whose grandfather described him as “the sweetest little boy that I’ve ever known.” And fourth grader Xavier Lopez, 10, who was the life of the party at all his family’s barbecues and had received his honor roll certificate just hours before he was killed.

I care about Eva Mireles, the teacher who died a hero protecting her students. For 17 years, Mireles taught the fourth grade out of pure love for her students. And I know this because my mother taught for 50 years and still has trouble paying her mortgage. There’s no money in teaching. Teachers are paid in smiles, hugs and mugs with silly sayings. It’s a barter system most of us will never understand and a love that many of us will never experience. And I don’t need to know if she shielded a child on the day she died: She was a hero 17 years ago when she walked to the front of her classroom, grossly underpaid, and gathered those tiny faces’ attention.

I don’t care about monsters.

Monsters leave wreckage in their wake.

Monsters gorge until there is nothing left but sadness and pain.

The media needs to stop trying to make men out of monsters. Not everyone is redeemable. Sometimes what it looks like is exactly what it is. Sometimes evil wins.

Once a life intrudes on another in the most violent way, finding out what that life was before that moment doesn’t matter. I don’t believe that monsters are afforded the rights of people. They don’t get to be redeemed. There is no need for reflection on the life they lived up until that point.

But for some reason, America wants to study them; it wants to know who they were before that day. Why? What difference does it make? Has it gotten us closer to understanding what makes them hate-filled and callous? Has it worked to curb the violence? If the goal isn’t to paint the monster in a more humanistic light, then why bother learning who they were before they attacked and unloaded their pain onto others?

In October 2017, columnists for Slate argued against my beliefs. In a piece titled “We Need to Humanize Shooters,” Elizabeth Adetiba and Jake Bittle argued that by not giving air to their stories we aren’t learning what makes them who they are and thus are stopped from preventing acts like this in the future. They write:

But responding to these harmful characterizations by saying that we must label mass shooters like [Las Vegas shooter Stephen] Paddock as “evil” and shun all information about their motives or struggles is course-correcting in the wrong direction. The truth, difficult as it may be to accept, is that societal influences play as much of a role in perpetuating mass shootings as they do in local, small-scale shootings. The magnitude of mass shootings makes the intentions behind them more difficult to comprehend, but these shooters are also products of a society that is notoriously apathetic toward more quotidian acts of violence.

While I agree that societal influences definitely play a part in the dejection and isolation that seems to be consistent in the mass-shooter profile, I don’t know what knowing that after the shooter has murdered innocent victims helps us to understand. Everyone is dejected and isolated at some point in life, but that doesn’t mean that any of us are going to commit mass murder. We would have to have precognition levels of insight to determine who has the propensity for this level of violence. But we can stop lionizing shooters and rehashing their past with a sympathetic bent.

If we must look at shooters past then it’s best we take our cue from this 2019 Los Angeles Times op-ed and use researchers’ exhaustive look at every mass shooting since 1966 as the template. The authors found four common themes. The first was that the majority of shooters have experienced childhood trauma, and as a result have mental health issues. The second is that in the weeks or months leading up to the shooting, almost all of them had experienced some kind of crisis that led to their breaking point. The third is the most intrusive and telling: that almost all of them studied other shooters, and in the information age, many were radicalized online. Finally, all of the shooters found ways to carry out their plans, from finding the location to securing a weapon.

These findings tell us much more than knowing that the Uvalde shooter missed large portions of school and wasn’t on track to graduate.

Other than learning whether or not the shooter has died after the shooting or has lived and will face justice, I don’t need to know anything else about them, nor do I care. The best thing to come out of the Uvalde shooting was learning that the monster was dead. The family of those who lost loved ones that day will not have to be further terrorized like those in the Buffalo supermarket shooting who will have the see the monster’s face every time he goes to court. You don’t get to take away 19 of the most vulnerable among us and two adults who loved them like family and tell us after the tragedy, after the remains, after the devastation, how tough you’ve had it. Because at that point I don’t care.

And the media needs to stop caring too.

5 Leading Newspapers Urge US To Drop Hunt For Julian Assange

In Protest-Hit China, A Math Equation Is Being Used As Slogan. Here’s Why