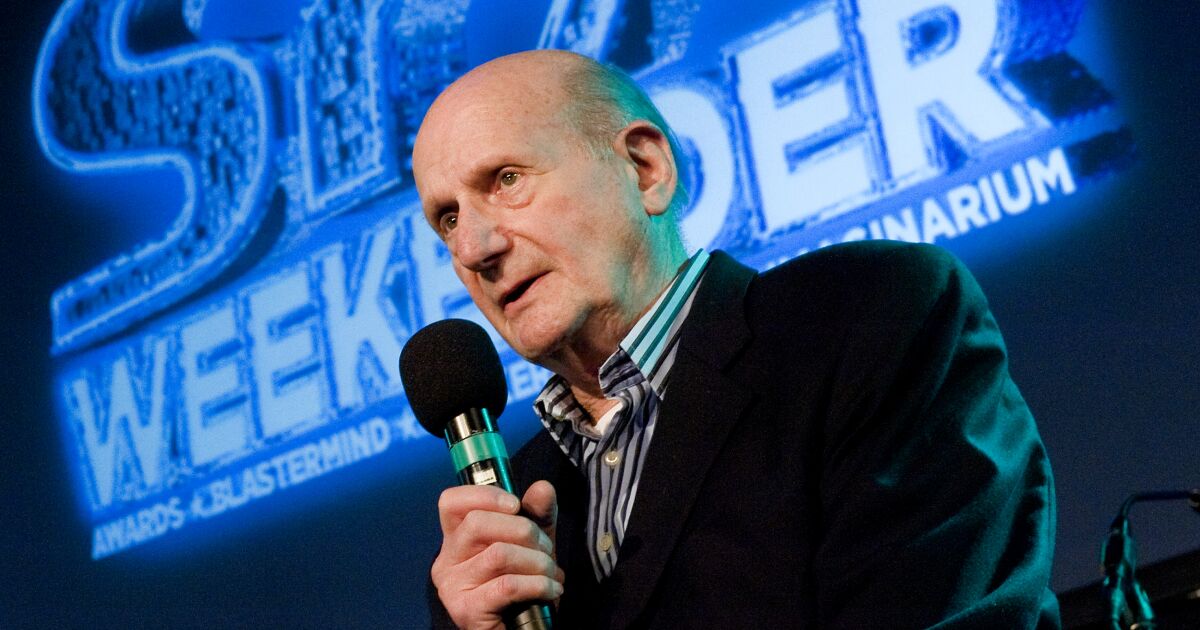 Last week saw the American DVD release of “Gerry Anderson: A Life Uncharted” (MPI Home Video), a new documentary on the British producer, writer and director best known here as the man behind “Thunderbirds,” the 1960s slow-action puppet adventure show — “filmed in Supermarionation” — and, among viewers of a certain age (or inclination), for its predecessors “Supercar,” “Fireball XL5” and “Stingray.” Boy and man, I was and am a fan of these fanciful series, which are not like anything else television has ever offered, and which, along with later highlights and midlights of Anderson’s career (which lasted in fits and starts into the 21st century), are still in circulation, a decade after Anderson’s death in December 2012, on home video and to stream, legally and otherwise. Some have lived on through novels, comics, soundtrack albums, radio dramas, model kits and action figures; to date, there are nearly 250 episodes of the cheery, cheeky “The Gerry Anderson Podcast,” co-hosted by youngest son Jamie Anderson. Anytime is the time to climb on board this atomic train.

None of Anderson’s series lasted more than a season or two (not even the flagship “Thunderbirds,” though it also produced two theatrical features). But this turnover meant that a variety of programs, several co-credited to second wife Sylvia Anderson — a credit Anderson regretted, along with the marriage itself, but which other collaborators say was deserved — were brought to fruition. These included the live-action “Space: 1999,” with Martin Landau and Barbara Bain, in which Moonbase Alpha and the moon itself go hurtling into deep space after a nuclear explosion, and the post-“U.N.C.L.E.” Robert Vaughn international detective show “The Protectors,” which were syndicated in America, and “Space Precinct,” with Ted Shackelford as a former NYPD lieutenant fighting crime on the planet Altor, which was not. There was the sci-fi drama “Terrahawks,” with its Muppet-style puppets, and the stop-motion fantasy “Lavender Castle.” But marionettes are what made him.

Television’s first puppet superstar was a marionette, Howdy Doody. There are advantages to that sort of figure — you can frame them from head to toe, place them bodily into a set. But where a hand in a sock can become something quite expressive and convincingly alive, marionettes, with their knees-up walk, their floating arms and bobbing heads, their fairly fixed expressions and utter lack of dexterity, have to work hard to seem at all natural. But those limitations also determined the structure of Anderson shows, which feature moving sidewalks, hovering chairs and scooters and place the characters in cockpits and at consoles, putting the emphasis on the materiel, the aircraft and submarines and super-cars, the impressive sets and miniatures — blown up or set afire with satisfying regularity. They used the tools of cinema — lighting, camera movement and angles, and clever editing — to make something new and unpredictable.

Anderson, who had entered the film business as an editor, backed into puppet television when the fledgling production company in which he was a partner made a commercial for the British equivalent of Rice Krispies, featuring a marionette version of Noddy, a popular children’s book character. It led to two shows commissioned by author Roberta Leigh, “The Adventures of Twizzle” and “Torchy, the Battery Boy” (whose theme song the Beatles were said to play at the Cavern), followed by a marionette western, “Four Feather Falls,” which introduced a voice-activated solenoid to move the puppets’ lower lips.

This was all preamble. The Anderson oeuvre proper begins in 1961 with “Supercar,” about a nifty land-sea-air vehicle (“It travels in space and under the sea/ And it can journey anywhere,” according to its theme song), whose pilot bears a coincidental resemblance to Eugene Levy. It began Anderson’s relationship with Lord Lew Grade, who would habitually greenlight his projects until the executive’s own power failed. “Fireball XL5,” a space opera, was next, and then “Stingray,” essentially an underwater “Fireball XL5” and the first Anderson production (and British program) to be made in color.

Then came “Thunderbirds,” in 1965, the work for which Anderson is most celebrated. If his science-fiction shows had been all about the machines — each was titled after the vehicle at its center — “Thunderbirds” offered five, count ’em, five big craft (and a host of smaller diggers and bulldozers), tooled to accomplish large-scale rescue operations — their enemies were industrial accidents, natural disasters and sabotage — plus a six-wheeled futuristic pink Rolls-Royce. Operations were run from the stylish Midcentury Modern island headquarters of International Rescue, home to chief Jeff Tracy and his five sons, all named for Project Mercury astronauts. (The Cartwrights of “Bonanza” were an inspiration.) As in earlier Anderson productions, the main characters were made American, the better to penetrate our insular market. (The Rolls belonged to the Tracys’ British associate, the aristocratic, glamorous Lady Penelope, played by Sylvia Anderson; comical Cockney chauffeur Parker, played by David Graham — also known as the voice of “Doctor Who’s” Daleks — was at the wheel.)

These shows evince a house style as quickly identifiable, domestically speaking, as the candy-colored, costumed fever dreams of Sid and Marty Krofft — the team behind “H.R. Pufnstuf” and “Sigmund and the Sea Monsters” — or the stop-motion holiday specials of Arthur Rankin and Jules Bass. But for a generation of Britons, they were even more culturally potent. The crafts and characters and catchphrases permeated the national consciousness; the vehicle-stars were, and for some incalculable segment of the public are, as familiar in silhouette as the James Bond Aston Martin, the “Star Trek” Enterprise, the Batmobile, the TARDIS.

The big heads of the early Anderson puppets were determined by the mechanics that controlled their lips; technological developments made it possible to produce marionettes with heads proportional to their bodies, which produced something even weirder. The characters of “Captain Scarlet and the Mysterons” (color-coded heroes, one of them virtually immortal, versus Mars-based aliens), “Joe 90” (9-year-old boy practices espionage when brainwaves of adult experts are piped into his head) and “The Secret Service” (vicar-spy shrinks associate, who is also his gardener, to doll size for doll-size missions) can come off something like a convention of Kens and the occasional Barbie. The cognitive dissonance is something like the “uncanny valley” that afflicts digitally created human characters. It’s easier to bring persuasive life to a digital caricature than to a presumably realistic human. Ironically — unavoidably, one might even say — Anderson’s last series was the 2005 CGI revival of “Captain Scarlet.”

Although Anderson described being “embarrassed” by working with puppets — he would have preferred to direct conventional films — it led him as a result to strive for greater realism in his productions, and to tackle more adult stories and themes. It was this ambition, and its limits, that form the heart of his legacy. What makes his shows permanently wonderful is the way in which their reach exceeds their grasp; they can never be naturalistic, though they are entirely real. Even as you surrender yourself to the story, you’re aware of the artifice, the art and craft and invention that went into creating these worlds. Delightful details fill the screen — these are shows not merely to watch but to look at. A “Thunderbirds” movie from 2004 starring Bill Paxton and Ben Kingsley, with a Hans Zimmer score, is technically unimpeachable but not nearly as interesting as the puppet show, with its often visible strings and handmade affect.

Directed by Benjamin Field, “Gerry Anderson: A Life Uncharted” presupposes a familiarity with Anderson’s work, which is seen only in brief clips to comment ironically on his life. But it has plenty to recommend it as a story of the British television industry in the 20th century, a turbulent personal drama and an examination of the way in which even unhappy personal experience may be transmuted into appealing popular art. (Hours of behind-the-scenes documentaries, if that’s what you’re after, may be found on the official Gerry Anderson YouTube channel, and elsewhere.) Jamie Anderson, the product of his father’s third (and at last successful) marriage, is its quasi-narrator, on a journey to understand a father who “produced 18 series and four feature films, owned six Rolls-Royce motor cars, had three children across three marriages and made and lost his fortune twice over,” but who in many ways remained a mystery to him. (Anderson speaks for himself here, with some “deep fake” visuals to accompany tape-recorded interviews.)

He was the product of an unhappy marriage — his father was Jewish his mother antisemitic, if you can imagine — whose idolized older brother was an RAF pilot killed in the Second World War. (His mother told him she wished it had been Gerry who died, a sentiment Anderson himself distressingly echoes.) That Anderson found success making shows about heroic pilots is a point not left unmade, nor is the fact that mothers are significantly absent from his series. In the end, it was all moot. Alzheimer’s disease erased both the trauma and triumphs from his memory, if not from the public’s. An overflow crowd attended his funeral, and a flower arrangement in the shape of the big green Thunderbird 2 sat atop his casket.