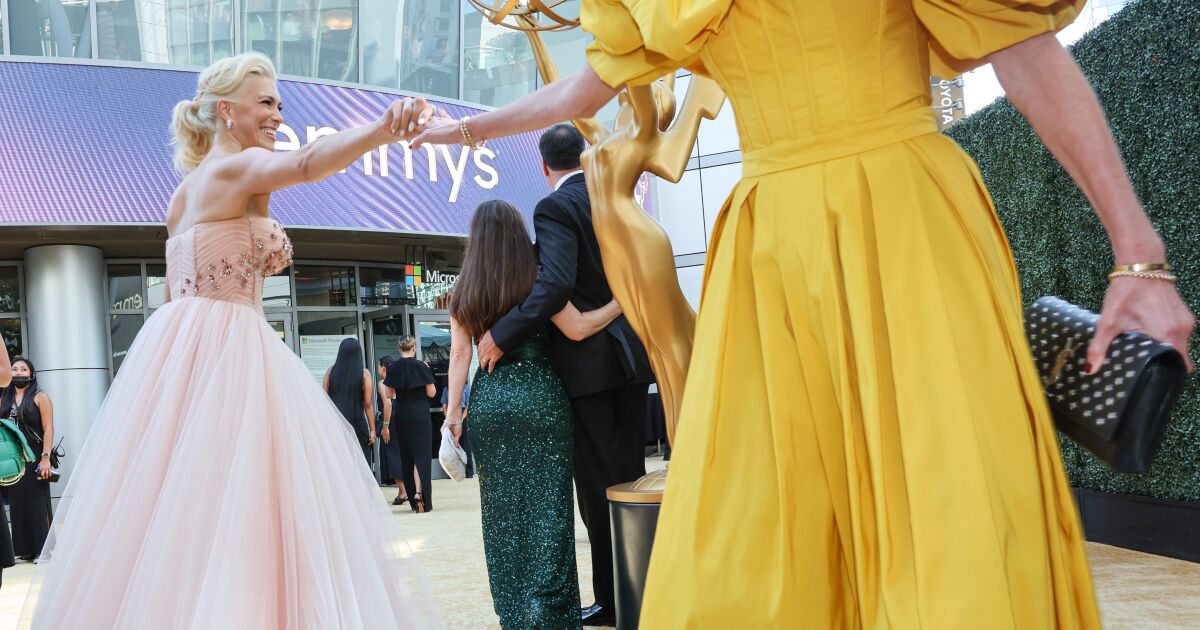 The Emmy Awards telecast, which took place at the Microsoft Theater in downtown L.A. on Monday night, might have been pushed a night from its usual Sunday time slot, but the looks that came across the gold-colored carpet made it well worth the wait, thanks to the attendees who deftly channeled Old Hollywood glamour, enthusiastically embraced sequins and shimmering mesh, or both — as Quinta Brunson and Amanda Seyfried did.

In addition to the two multiple nominees (Brunson with three nods, one each for producing, acting and writing for “Abbott Elementary”; Seyfried, producing and acting nominations for “The Dropout”), those on trend included Elle Fanning (a first-time nominee for “The Great”), who specifically invoked Hollywood gone by; she told E! Entertainment’s Laverne Cox (on “Live From the Red Carpet”) that she’d tapped her show’s costume designer, Sharon Long, to design the strapless black gown with pale pink accents, a callback to the way legendary costume designers of old like Edith Head did it under the studio system.

Not all of the night’s focus-pulling looks needed shiny things to get heads turning and tongues wagging, though. Case in point: supporting actress nominee Hannah Einbinder (“Hacks”) in a sleek, strapless custom Rodarte gown and Zendaya, whose Valentino ballgown take on “black tie” was as simple as it was stunning.

9:24 p.m. Sept. 12, 2022Laverne Cox wore a Jean Paul Gaultier X Olivier Rousteing design on the Emmys gold carpet. An earlier version of this article reported it was by Olivier Theyskens.

It wouldn’t be an awards show arrivals telecast without at least a few fashion missteps, and this year’s could’ve-done-better award goes to supporting actor nominee Nicholas Braun (“Succession”), whose single-button double-breasted Christian Dior showed how not to attempt an all-white outfit (compared with Andrew Garfield’s peak-lapel Zegna tuxedo, which was all-white done right — especially when paired with a pair of sunnies). And “Live From the Red Carpet” co-host Laverne Cox, usually stellar on any color carpet anywhere, came off more cartoonish than couture in a Jean Paul Gaultier X Olivier Rousteing look.

Laverne Cox in a sculptural Jean Paul Gaultier fall and winter 2022 is a rare misstep.

First-time nominee Elle Fanning (“The Great”) told Laverne Cox on the Emmy Awards gold carpet that she was paying homage to Old Hollywood glamour — “When costume designers … would create gowns for the red carpet.” She explained that she’d tapped “The Great” costume designer Sharon Long (who recently took home an Emmy for her work on the show) to design her outfit. The result was a serious Grace Kelly vibe that was an early standout look.

“Ted Lasso” actress Hannah Waddingham told E!’s Laverne Cox on the Emmys arrival carpet that the best part of wearing her voluminous Dolce & Gabbana gown was that “nobody knows that you’re not wearing heels!” After which she promptly hiked up the hem to reveal her sequin-festooned sneakers she was sporting.

Is “Pam & Tommy” nominee Lily James paying homage to the real-life actress she played in the limited series by choosing an Atelier Versace bronze metal mesh dress? I’m not sure — but the gown is one of my favorites of the evening so far. A stunner.

“Abbott Elementary” triple nominee Quinta Brunson seems to be at least three times as stylish as anyone else on the gold carpet thanks to her custom Dolce & Gabbana gown with one of the evening’s most daring leg slits. On the arrivals carpet she told Laverne Cox she was aiming for something that would make her feel “va-va-voom but respectful” since she was there as a producer, writer and actor. We say “mission accomplished” on the look Brunson said made her feel like “a teeny tiny Jessica Rabbit.”

Zendaya in black tie? It works—especially if that means a super-simple — but drop-dead gorgeous—strapless Valentino gown with a bow tie-as-belt-buckle detail that cinched a tiny top to acres of voluminous skirt.

“I’m a mermaid tonight,” double nominee Amanda Seyfried (both noms are for lead actress and producer for “The Dropout”) told E!’s Loni Love on the Emmy’s arrival gold carpet, referring to her outfit. That might be the understatement of the evening, thanks to an Armani Privé blush pink strapless gown embroidered with crystal mesh that brought her closer to Venus on the half shell.

I’m as much of a fan of Gucci as I am of Julia Garner (nominated for “Ozark” and “Inventing Anna”), but her Emmy outfit was evidence that diamonds aren’t always a girl’s best friend — in this case, the unfortunate, focus-pulling diamond-shaped cutout at her belly button.

Niacinamide, retinol, collagen, AHA, BHA: What they do and to whom | Fashion Trends

States’ capital spends up 2.2% in 1st half despite huge spike in revenues

States’ capital spends up 2.2% in 1st half despite huge spike in revenues